A museum tour with Wendell

A museum tour with Wendell

Since the rooms are kind of ready, before placing the objects, we are doing a small our for our patrons, so that they can see the rooms before they put in their money. 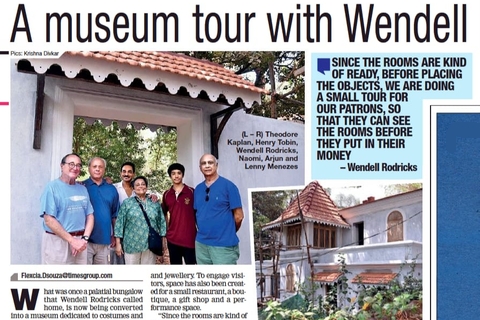 What was once a palatial bungalow that Wendell Rodricks called home, is now being converted into a museum dedicated to costumes and apparel down the ages in Goa. On Tuesday, Wendell took a group of visitors around the building, explaining to them how he has thematically divided the exhibits to be displayed in the different rooms.

One of its kind in India, the Moda Goa Museum and Research Centre being set up in the 450-year-old heritage house in Colvale will have around 15 galleries, which will traverse through art, religion, culture and, of course, fashion to tell a story of Goa’s history. Apart from an in-house library, the museum will house a ‘gold room’ for artefacts and jewellery. To engage visitors, space has also been created for a small restaurant, a boutique, a gift shop and a performance space.

“Since the rooms are kind of ready, before placing the objects, we are doing a small our for our patrons, so that they can see the rooms before they put in their money,” said Wendell, as he took around the group of guests, explaining what the museum will look like on completion. “Lenny Menezes is a patron and on his
recommendation, we got Theodore Kaplan, an expert on textiles, especially from India, who used to work with Sotheby’s, the auction house. I was very keen that they see the museum,” says Wendell.

“It is fantastic. I am impressed with the thought that has gone into every detail,” Kaplan said, clearly impressed with what’s in store when the museum is eventually thrown open in December.  “We take a trip to India every year and research and collect Indian fabrics.” he added.

There is no such thing as Goan fashion. But there is Goan style as there is Indian style. Every state in India has a costume history and Goa has its fair share. In fact, Goa has a larger chunk than most as it was always a trading port with local and international people. It was also desired as a port of conquest by Indian kingdoms and by the Portuguese. Every invader left a mark on the evolving Goan style. What are the main elements/influences?

Being near the sea, we can say that the sea and the hills dictated the Goan style. On one level were fisherfolk who needed clothes in which they could easily step in and out of boats and on the other end, people who worked knee-deep in paddy fields, climbed coconut and mango trees, and worked at various jobs from masonry, carpentry and blacksmith. All these influenced the costume of the state.

When did you first think of this museum? What prompted it?

I took 10 years to research Moda Goa, and a year to write the book. During this time, I began collecting objects. I knew that these objects would become museum-worthy. Hence, the next natural progression was to have a museum.

You say that the museum will be based on your book, Moda Goa, which is the history of Goa as seen through the clothes Goans wore. How far back in time will you trace the sartorial legacy?

Like in the book, we will start from prehistoric times till the present. Everyone seems to think that the history of Goa begins and ends with the Portuguese. Nothing is further from the truth. There were tribes, the Greeks and the Romans visiting Goa, Persians and Arabs trading, the arrival of the Buddhists and Jains, Hinduism in various avatars, the Deccani Muslims who predate the Portuguese.

There is a difference between the Hindu and Christian sartorial preferences. Can you elaborate on the differences?

Before the arrival of the Portuguese, we were all Goans, or rather Konkani people. The differences came later. What I would like to dwell on, however, is the commonalities between all faiths in Goa.We are similar in more ways than different in many ways. Even today, one can meet a Goan and can’t tell if they are Hindu, Muslim, or Catholic. There is a common DNA among the Goans.

Were there any famed fashion designers who changed the course of fashion in Goa?

Not just designers, but models, make-up and hair artistes, photographers. The list is extensive.

Are there any major milestones in Goan fashion?

In several countries, women have been victims of moral policing. Were there any big dress do’s and don’ts for women in Goa?

The Inquisition in 1560 was a blow to Goan dress for both women and men. Many edicts later curbed the wearing of Indian or Goan clothes. The Portuguese wanted to create a hybrid society and to a large extent they succeeded.

What about accessories? How big a role did jewellery play?

Do you know that Goan goldsmiths were Daivajna Brahmins? Their skill was so admired that they became the first Indians to cross the seas to the West to make jewellery for the courts of Lisbon, Paris and parts of Spain and Italy. Gold is one of the most ancient of arts in Goa that is still cherished today.

What about hats and scarves?

Nothing great about hats and scarves. They were accessories imported from the West after the conversions. More importantly, we had our own turban drapes, shoes and accessories much before the arrival of the Portuguese.

You have requested Goans to donate vintage clothing for the museum. What has been the response so far?

The response has been generous, and we  are looking for more pieces of heritage value.

You’re turning the house into a museum. How was the process?

I have no physical attachment to anything. Everyone seems surprised by the move, but I am happy this home goes to a worthy cause.