The Legend of a Goan Dancing Gown

The Legend of a Goan Dancing Gown

A personal quest for the Pano Bhaju, a traditional goan costume worn for dances and community celebrations, led designer Wendell Rodricks onto a path of unravelling goa’s vibrant fashion heritage. 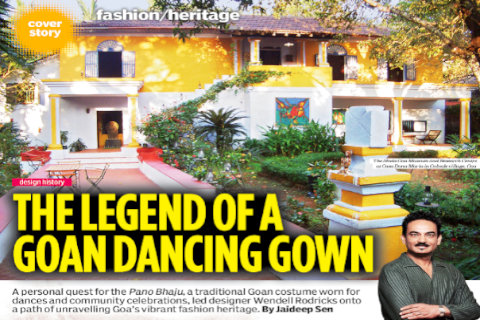 He’s one of the world’s most admired names in fashion design. He’s also a prominent social activist, an active eco warrior, and one of the most genuine gay rights advocates around. He also has a Padma Shri to go with the uncountable design and leadership awards on his mantlepiece. But to most people who know him, especially in and around his hometown of Goa, Wendell Rodricks is possibly just the nicest, sweetest and most kind-hearted soul they’ve ever known.

The celebrity designer and social figure is now set to make the next giant leap in personal terms — as he’s now set to literally write his name into the giant, crinkly paged annals that will eventually be defined as the history books of tomorrow. If you might sense a hint of irreverence, or some misplaced hyperbole — fret not, as Wendell is interested purely in preserving the spirit of Goan culture. And the wanton, free-spirited Goan nature of things is only par for the course.

What makes things truly enriching is that this next big chapter in Wendell’s life runs deep into his own personal history. This summer, after many years of research, painstaking renovation and curatorial work, Wendell is set to open up his fully restored 450-year-old ancestral home, named Casa Dona Maria in the village of Colvale, as the new Moda Goa Museum and Research Centre — a museum dedicated to Goan costumes; the first of its kind in the country, and possibly the only one in the world.

The Moda Goa Museum & Research Centre will join the prestigious list of costume museums all over the world.

For a bit more of background context, Wendell also happens to be a published author, having released books such as The Green Room (2012) on Indian fashion, and Poskem (2017), a fictional look at a grim Goan tradition. His earlier book, Moda Goa: History and Style (2012), reportedly took him over ten years of research, before going to print. Wendell’s new museum, in turn, is essentially a curation of his personal collection of curios, artefacts and bric-a-brac over the years — primarily focused on unearthing slices of Goan heritage. You could think of Moda Goa as Wendell’s own museum of innocence, for all things to do with Goan costumes, design and lifestyle through the generations.

With this, Wendell will – in unofficial terms – also begin to be described as not just the patron of a museum, but a benevolent benefactor of the arts, and a saint for preserving indigenous cultural heritage. But before we amplify the accolades any further, we realise just how humble Wendell can be as a human being — to extend his personal time, energy and belongings for the greater cause of building a thoroughly Goan sense of cultural identity.

We got to interact with Wendell on the sidelines of one of his many recent presentations on the museum, to talk about the project, and its research implications. He began by telling us how all of it actually started with a suggestion by the late great cartoonist from Goa, Mario Miranda — to look up a certain garment called the Pano Bhaju, a traditional Goan wraparound garment, somewhat like a sarong, and worn under a blouse, ostensibly for events that involve dancing and community celebration.

Wendell’s personal quest to unravel the history of the Pano Bhaju, in essence, defines the Moda Goa Museum experience. Excerpts from an interview:

Tell us about the Pano Bhaju garment. Why was Mario interested in it, and what did it take for you to finally track it down?

The Pano Bhaju is a garment that was worn by ladies to dance the Mando (traditional dance). I had not seen the garment until Mario mentioned the ensemble, because this garment was worn by high-class Christian Goans in the Margao area. Not North Goa where we grew up and now live. The origins of the garment are unusual with many influences. I researched the garment and spoke about it last year at The Goa Lit Fest 2017. (You can look up Wendell’s presentation on the Pano Bhaju on the YouTube page of the International Centre Goa/ICGGOA.)

Ten years of research, a book and years of groundwork have gone into this project. Take us back to your earliest thoughts, or dreams perhaps, with doubts, hopes and all.

After Mario’s request to do a chapter on the Pano Bhaju for a book in 1998 (that eventually never saw the light of day), I decided that if there was one person qualified to research and document the entire Costume History of Goa, it was me — as I was already lecturing on World Costume History for fashion students at SNDT University. So I took on the daunting task.

I had to learn Portuguese to read the documents and books, both in Goa and Lisbon. The Fundacao Oriente gave me a scholarship to intern at The National Costume Museum in Lisbon. After three months of internship, I went to The Museum at FIT, New York and interned for a further three months under celebrated, world-renowned author and fashion curator-director Valerie Steele. This was in 2000, and it was overseas during both internships that I considered the possibility of opening a Costume Museum in Goa.

But first, the research and the book had to happen. The book Moda Goa: History and Style was released in 2012 at the Jaipur Lit Fest by Rajeev Sethi and in Goa by V&A Museum Curator Director Rosemary Crill from London. Actress Rekha launched the book in Mumbai and Umang Huttesingh did the Bengaluru launch. During this lengthy period, I began to collect textiles, clothes, accessories and gold. This was sufficient to start the Moda Goa Museum. We moved out of our 450-year-old home in 2016, and began work to convert the home into The Moda Goa Museum and Research Centre.

Could you give us a short, virtual tour of your 450-year-old home, in a few words? Give us a sense of your earliest memories there.

I moved into Casa Dona Maria in 1993 after the Bombay riots. It was a home that we lived in for 25 years. Those were years of much happiness, many pets and a fabulous garden. Along the way, we hosted many interesting intellectuals and celebrities at Casa Donna Maria. Naturally models, photographers and makeup artist stayed at home to create some enduring fashion images that became classics. The home had five bedrooms, but as The Moda Goa Museum & Research Centre, the house now has 15 galleries, a boutique and a vast library of over 1,000 books.

When phase two is complete — after three years — we will have added offices, conference rooms, storage areas, a conservation laboratory and a scholar’s residence. There will also be a cafeteria and a performance area. At the moment, we are focusing on funding. We need another Rs 6 crore after investing Rs 6 crore already. We are selling the galleries, which one can buy in the name of a loved one, to keep their names for posterity in the museum. Those who want to claim a gallery can go on the Moda Goa Museum website for details of how they can support the museum, and help fund various areas.

This will be the first Costume Museum in India. Not just a costume museum but also a research centre. The project has the blessing and support of the Ministry of Culture and The Ministry of Textiles. There are many textile museums in India, but no costume museum. The Moda Goa Museum & Research Centre will join the prestigious list of costume museums all over the world.

How close are we to the idea of ‘fashion museums’, to accord fashion as much regard as say, architectural or product design, to merit dedicated museum space?

This will be a first in the country. It is exciting and challenging. We have a group of professionals on board for every aspect of the museum planning, documentation, photography, lighting, display and storage archives.

How valuable would you say this collection is? If not in monetary terms, how much time and energy did you spend to pick up each piece that makes this collection?

The objects were collected since 1998. We want this museum to be world class in every way so that we can join ICOM (The International Committee of Museums) which will allow us to get objects on loan for temporary exhibitions from international museums and vice versa. Every object has been curated to international museum standards.

Are there any particular finds that you’d like to recall? Something truly unusual, and unexpected that you’re really proud of?

There are too many objects that are precious. One cannot choose favourites among them. It is like picking a favourite child. Every gallery has treasures in value that are not necessarily monetary but more important, culturally. Goa and I did will be proud of this Musuem and it will be my legacy to state and country.

For now, two autographs from the Pope and The Dalai Lama are precious to me. I am also trying to get a garment blessed or touched to the relic of St Francis Xavier. In Old Goa.

Will you be extending this collection, as inspiration, into your forthcoming designs? How would you ideally translate a sense of heritage into a modern ensemble?

I have given my label to Schulen Fernandes since two years now to focus on the museum. If she or other fashion students want to do a modern collection based on the objects or a story line, I leave it to them to translate the same. I will focus on further research, writing books, teaching and doing social work once the museum opens. Fashion design as a career is behind me.

Tell us a little about the research centre. Any specific areas of study, and subjects you’d like to actually generate out of the material you have?

The research centre is not a physical space as such. Apart from the museum itself and its large collection, students, scholars and the public can use the library, clothing and textile archives to research papers… they can leave a copy of their research for the Museum Library, so that the learning process is encouraged among our youth for future generations.

The book itself is a keepsake. And now, you have the museum. Is there a documentary to go with this project? What after that, a travelling show, perhaps?

Our temporary exhibitions will change every three months. In the temporary exhibition gallery, we will have the opportunity to let the exhibition ‘travel’. It’s ironical that you mentioned a documentation because I got an offer just this morning from a senior journalist to document the process of how a book became a museum — in a coffee table book format.

By Jaideep Sen
From The New Indian Express, 15 March 2019