Fashion designer, writer and environmental activist Wendell Rodricks is now restoring the history of Goa for posterity with his museum Moda Goa which will be open to public in late 2018. 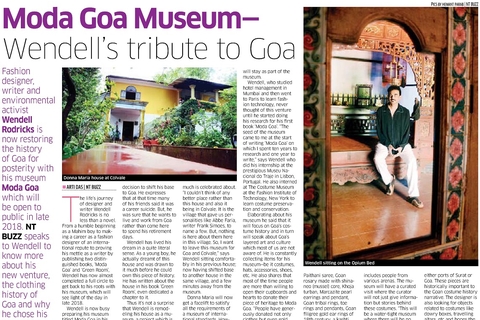 The life’s journey of designer and writer Wendell Rodricks is no less than a novel. From a humble beginning as a Mahim boy to making a career as a fashion designer of an international repute to proving his mettle as a writer by publishing two distinguished books, ‘Moda Goa’ and ‘Green Room’, Wendell has now almost completed a full circle to get back to his roots with his museum, which will see light of the day in late 2018.

Wendell is now busy preparing his museum titled Moda Goa in his 450-year-old Goan house Donna Maria. The house which was his home for more than 20 years is now getting the look of a museum. Wendell bought this house in the year 1993 and took a bold decision to shift his base to Goa. He expresses that at that time many of his friends said it was a career suicide. But, he was sure that he wants to live and work from Goa rather than come here to spend his retirement days.

Wendell has lived his dream in a quite literal sense. As a young boy, he actually dreamt of this house and was drawn to it much before he could own this piece of history. He has written about the house in his book ‘Green Room’, even dedicated a chapter to it.

Thus it’s not a surprise that Wendell is remodeling his house as a museum, a project which is close to his heart, moreover as it is in his ancestral village of Colvale.

NT BUZZ speaks to Wendell to know more about his new venture, the clothing history of Goa and why he chose his house and Colvale village for this new chapter of his life.

For him it also an exercise to give back to this village which has contributed immensely to Goa’s history but not much is celebrated about. “I couldn’t think of any better place rather than this house and also it being in Colvale. It is the village that gave us personalities like Abbe Faria, writer Frank Simoes, to name a few. But, nothing is here about them here in this village. So, I want to leave this museum for Goa and Colvale,” says Wendell sitting comfortably in his previous house; now having shifted base to another house in the same village, and a few minutes away from the museum.

Donna Maria will now get a facelift to satisfy all the requirements of a museum of international standards. However, he will not change the original look of the house. The altar from the Mandrem Church which gives distinct look to the house and the Opium Bed that reflects the Chinese influence on Goan dress will stay as part of the museum.

Wendell, who studied hotel management in Mumbai and then went to Paris to learn fashion technology, never thought of this venture until he started doing his research for his first book ‘Moda Goa’. “The seed of the museum came to me at the start of writing ‘Moda Goa’ on which I spent ten years to research and one year to write,” says Wendell who did his internship at the prestigious Museu Nacional do Traje in Lisbon, Portugal. He also interned at The Costume Museum at the Fashion Institute of Technology, New York to learn costume preservation and conservation.

Elaborating about his museum he said that it will focus on Goa’s costume history and in turn will speak about Goa’s layered art and culture which most of us are not aware of. He is constantly collecting items for his museum – be it costumes, hats, accessories, shoes, etc. He also shares that most of the time people are more than willing to open their cupboards and hearts to donate their piece of heritage to Moda Goa. “People have generously donated not only clothes but even gold ornaments. Like I have 22K 16th century gold bangles, a 17th century cross from St Monica’s Church. Someone has donated their mother’s hats. One lady from Mumbai donated her entire wedding box. It is beautifully preserved. It has all the costumes, accessories, shoes and even undergarments,” says Wendell. Sometimes he got items which the family members were also not aware of. “It was from a house in Aldona that I got a wooden mould. It was in the shape of Shiv linga. But, the family was not aware what it was exactly. Later, I found out that it was a hat mould,” says Wendell.

Speaking about accessories, Wendell mentions that shoes are an important part of his collection. “I am also in the process of collecting shoes of important people like Mario Miranda, first chief minister of Goa. I also managed to get chappals of a famous educationist,” says Wendell.

All these items speak about Goa’s history and its various influences of religion, region, etc.

Wendell understands the intricacies and the hard work of Goans behind all these objects, especially of the Goan goldsmiths. They were among the first Goans to travel to Lisbon for work. They were well-known for their filigree work.

Wendell, who has set a deadline of late 2018 to open his museum, mentions that the trust is already set up and it includes people from various arenas. The museum will have a curated visit where the curator will not just give information but stories behind these costumes. “This will be a water-tight museum where there will be no interference from the government bodies. It will be not only self-sustaining but should be also able to buy any object of Goan importance from an auction house,” states Wendell while speaking about the future plans of the museum.

Wendell is also working on an interesting concept of making replicas of old pieces which are in the Lisbon museum. He has asked his friends in the design industry to make them – items like old garments, Portuguese clogs and embroidery samples. Many of the garments were sent from either ports of Surat or Goa. These pieces are historically important to the Goan costume history narrative. The designer is also looking for objects related to costumes like dowry boxes, travelling altars, etc and hopes the Goan public and the diaspora would provide leads or donate such items to the Moda Goa museum where they will enjoy a wider audience and keep the family’s name as donor for perpetuity.

On a concluding note Wendell clears the air that this museum is not for himself but for his homeland – Goa. “This museum is not to retain my name. It is for the people of Goa and to tell people that Goa is not only about parties and beaches but which has a long history and this museum is a reflection of that,” says Wendell.