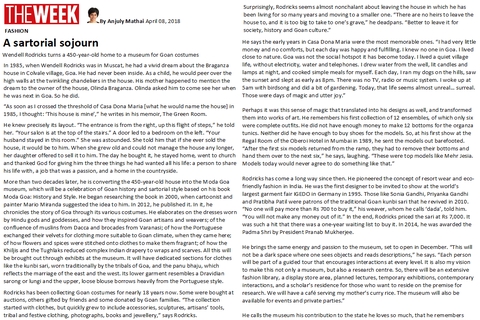 In 1985, when Wendell Rodricks was in Muscat, he had a vivid dream about the Braganza house in Colvale village, Goa. He had never been inside. As a child, he would peer over the high walls at the twinkling chandeliers in the house. His mother happened to mention the dream to the owner of the house, Olinda Braganza. Olinda asked him to come see her when he was next in Goa. So he did.

“As soon as I crossed the threshold of Casa Dona Maria [what he would name the house] in 1985, I thought: ‘This house is mine’,” he writes in his memoir, The Green Room.

He knew precisely its layout. “The entrance is from the right, up this flight of steps,” he told her. “Your salon is at the top of the stairs.” A door led to a bedroom on the left. “Your husband stayed in this room.” She was astounded. She told him that if she ever sold the house, it would be to him. When she grew old and could not manage the house any longer, her daughter offered to sell it to him. The day he bought it, he stayed home, went to church and thanked God for giving him the three things he had wanted all his life: a person to share his life with, a job that was a passion, and a home in the countryside.

More than two decades later, he is converting the 450-year-old house into the Moda Goa museum, which will be a celebration of Goan history and sartorial style based on his book Moda Goa: History and Style. He began researching the book in 2000, when cartoonist and painter Mario Miranda suggested the idea to him. In 2012, he published it. In it, he chronicles the story of Goa through its various costumes. He elaborates on the dresses worn by Hindu gods and goddesses, and how they inspired Goan artisans and weavers; of the confluence of muslins from Dacca and brocades from Varanasi; of how the Portuguese exchanged their velvets for clothing more suitable to Goan climate, when they came here; of how flowers and spices were stitched onto clothes to make them fragrant; of how the Khiljis and the Tughlaks reduced complex Indian drapery to wraps and scarves. All this will be brought out through exhibits at the museum. It will have dedicated sections for clothes like the kunbi sari, worn traditionally by the tribals of Goa, and the panu bhaju, which reflects the marriage of the east and the west. Its lower garment resembles a Dravidian sarong or lungi and the upper, loose blouse borrows heavily from the Portuguese style.

Rodricks has been collecting Goan costumes for nearly 18 years now. Some were bought at auctions, others gifted by friends and some donated by Goan families. “The collection started with clothes, but quickly grew to include accessories, sculptures, artisans’ tools, tribal and festive clothing, photographs, books and jewellery,” says Rodricks.

He says that some of the most fascinating pieces he collected were not the more expensive ones, but rather those that were treasured possessions of Goan families. “It was always a joy to hear personal stories,” he says. “Just two weeks ago, a lady in Lisbon gifted her grandmother’s wedding dress. I thought it would be a white bridal gown. But it was an exquisite red, blue and gold panu bhaju, a garment that women wore to dance the Goan Mando in the late 1890s and early 1900s.”

Surprisingly, Rodricks seems almost nonchalant about leaving the house in which he has been living for so many years and moving to a smaller one. “There are no heirs to leave the house to, and it is too big to take to one’s grave,” he deadpans. “Better to leave it for society, history and Goan culture.”

He says the early years in Casa Dona Maria were the most memorable ones. “I had very little money and no comforts, but each day was happy and fulfilling. I knew no one in Goa. I lived close to nature. Goa was not the social hotspot it has become today. I lived a quiet village life, without electricity, water and telephones. I drew water from the well, lit candles and lamps at night, and cooked simple meals for myself. Each day, I ran my dogs on the hills, saw the sunset and slept as early as 8pm. There was no TV, radio or music system. I woke up at 5am with birdsong and did a bit of gardening. Today, that life seems almost unreal… surreal. Those were days of magic and utter joy.”

Perhaps it was this sense of magic that translated into his designs as well, and transformed them into works of art. He remembers his first collection of 12 ensembles, of which only six were complete outfits. He did not have enough money to make 12 bottoms for the organza tunics. Neither did he have enough to buy shoes for the models. So, at his first show at the Regal Room of the Oberoi Hotel in Mumbai in 1989, he sent the models out barefooted. “After the first six models returned from the ramp, they had to remove their bottoms and hand them over to the next six,” he says, laughing. “These were top models like Mehr Jesia. Models today would never agree to do something like that.”

Rodricks has come a long way since then. He pioneered the concept of resort wear and eco-friendly fashion in India. He was the first designer to be invited to show at the world’s largest garment fair IGEDO in Germany in 1995. Those like Sonia Gandhi, Priyanka Gandhi and Pratibha Patil were patrons of the traditional Goan kunbi sari that he revived in 2010. “No one will pay more than Rs 700 to buy it,” his weaver, whom he calls ‘dada’, told him. “You will not make any money out of it.” In the end, Rodricks priced the sari at Rs 7,000. It was such a hit that there was a one-year waiting list to buy it. In 2014, he was awarded the Padma Shri by President Pranab Mukherjee.

He brings the same energy and passion to the museum, set to open in December. “This will not be a dark space where one sees objects and reads descriptions,” he says. “Each person will be part of a guided tour that encourages interactions at every level. It is also my vision to make this not only a museum, but also a research centre. So, there will be an extensive fashion library, a display store area, planned lectures, temporary exhibitions, contemporary interactions, and a scholar’s residence for those who want to reside on the premise for research. We will have a café serving my mother’s curry rice. The museum will also be available for events and private parties.”

He calls the museum his contribution to the state he loves so much, that he remembers every hill and every tree of his childhood there. He has woven Goa into his collections and into his heart. His professor once told him that to be successful he should play to his strengths. “No one can do Kashmir as well as Rohit Bal. Or, Bengal as well as Sabyasachi Mukherji. If anyone does Goa better than me, I’ll kill them,” he says with a laugh.